Emotional Eating: The Debacle with a Diabolical Woman

Even the Food Relationship Coach Dives Into Emotional Eating.

I am gifted in public speaking; or so I thought.

I wrote that in my journal because my coach gave me the assignment to find something that I am good at and declare it every day.

Oh well here goes nothing so, one day I wrote that I was gifted at public speaking.

As soon as I declared this public speaking gift; I was asked to publicly speak and since I am so gifted at publicly speaking I didn’t practice like a gift speaker would do.

Instead I just kind of winged it.

I was attending my friend’s 2 day market domination event and she gave me this speaking opportunity.

From what I understood; the purpose of this speech was to place the video on my website.

I was the first to get up. I was a little nervous, but heck I am a gifted speaker; now problemo!

I spoke; I received a few giggles (less than I had intended).

I was about to step off the stage and my friend says WAIT! Lets’ get feedback from the audience.

Shit! I am a gifted speaker I don’t need to hear feedback.

The participants were very sweet: they started with what was good and what could be even better.

I agreed and thought this isn’t too bad even gifted speakers need a little improvement right?

Then the debacle with the diabolical women happened.

She stands up and says “3 things”.

She went on to give me the definitions of each.

She responded “Yes you said it 2 times.” 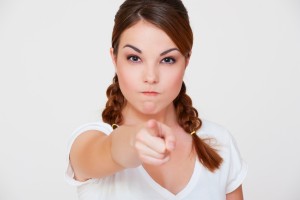 I got off the stage and was raging inside. I was shaking and tears started to form. Since I have big eyes; hiding tears filling them become quite obvious.

However, I was not going to give that bitch the satisfaction and since she was sitting at my table; I kept turning my head and taking deep breaths.

The self-defensive me came out with her claws and in my mind I said:

“ Diabolical bitch! How dare you embarrass me in front of the whole group? If you had any class, you would have pulled me aside and shared the diabolical debacle but obviously you have no class.”

Then the diabolical bitch in my head started laughing:

“Ha guess you are not so gifted after all! Why don’t you go hide your fat ass in the corner and quit trying to make this big impact. Who do you think you are?”

As lunch ended and the afternoon rolled on I felt myself feeling imprisoned, trapped and all I wanted to do was run.

But I good girl doesn’t run. She sits and has a smile on her face and stuffs her face with skittles.

That diabolical bitch in my head was having a big day and she let me know that my emotional eating is not under control. 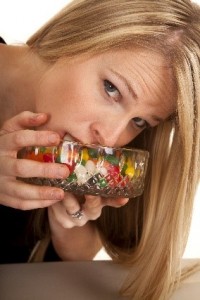 She said that all eyes were on me and whispering:

“Look at the health cook pouring skittles into her mouth.”

After the skittle were gone I needed salt so I bought a bag of barbeque potato chips and stuffed those in my face while a sat in the bathroom.

When I went home I was so angry that I allowed this diabolical woman to add to my debacle of a day.

I would have sworn on a stack of bibles that I had licked emotional eating.

I went to bed and woke up at 3am and immediately felt this big weight on my chest.

I got up and went to my meditation chair and prayed.

Well it really was more of a bitch fest than a prayer fest.

I said to God: we are hashing this out once and for all. Today I was either going to go for it or I am walking away for good. forever.

I told God that I didn’t trust him. After all, I did everything I could to build my last company and I failed miserably. Give me a reason to have some faith. To learn about How Health Coaching made me fat, sick and miserable go here.

“You are gifted at speaking yet that does not mean you don’t have to practice. Get real Maureen, you could have practiced more. Heck, if Michael Jordan didn’t practice he would only be a great talent that we may have wondered what he could have done.  Take responsibility Maureen for your part in this debacle.  It is not the diabolical women’s fault that you poured skittles down your throat. Quit blaming her.  Faith has no guarantees that’s why you call it faith!

The weight lifted and I became grateful for:

The next day I was back in that room and sitting across from the diabolical woman who I realized was no longer diabolical and throughout the day she proved this by:

Even though to the rest of the room; her diabolicalness seemed to escalate I saw something quite profound:

Others are not cruel because we deserve it. Rather the cruelty comes from some misguided idea that THEY deserve it. 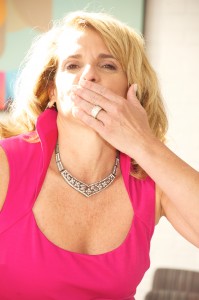 The debacle, the diabolical woman and dive into the skittles became one of the highlights of my year.

Enough about me!Let’s start some emotional eating blessingfest! In the comment section below; share a emotional eating event and how it become a blessing in disguise. I am here to support you!

Maureen’s journey to Cooking Healthy Academy began long before she conceived of owning a business. As she raised her children and battled her own addiction to food, Maureen learned how to silence that voice of self-criticism, fully accept her body, and give herself every opportunity to heal. From these foundational experiences, she developed a philosophy she couldn’t wait to share with others. At Cooking Healthy Academy, we believe you know how to eat; you just forgot you knew. We help you look within to discover which eating plan works best for you. Then we help you customize a lifestyle that truly honors you. Through the act of cooking within a community, you will finally be able to jump off the diet bandwagon and create an eating lifestyle that allows you to release weight while feeling satisfied and fulfilled.

Let's get in touch

Send me an email and I'll get back to you, as soon as possible.